By Shelley Quezada, Consultant to the Underserved

For a number of m

onths last year, residents of Bellingham were invited to participate in an array of programs for all ages that focused on environmental literacy including alternative energy  recycling and water resources. From March through September 2017 the Bellingham library carried out a series called “Enlighten Bellingham” to engage community members in meaningful science and technology experiences. The Bellingham Public Library was one of three Massachusetts libraries chosen as a pilot library for a project funded with federal funds coordinated by the Maine State Library, the Massachusetts Board of Library Commissioners and Cornerstones of Science, a Maine nonprofit. The goal was to create a field-tested, replicable science literacy method that would enable designated public libraries to become skilled STEM facilitators. 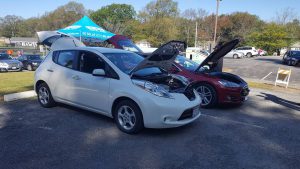 Programs included information on upcyclying, using plastic bags to crochet, and the why and how of solar panels.  One of the most  exciting events was an Electric Car Show conducted with support from the New England Electric Auto Association.  Members of the audience engaged  presenters by asking relevant  questions and showing a real interest in how new technology  might be of benefit in the future.  Later this year the library will host a second electric car show and invite partners who presented in last year’s series on solar, water, and recycling as part of a final day long open house.

As part of this initiative the library  held a Build a Better World Science Fair to conclude the popular summer reading program.  They also subscribed to a program called Tinker Crates and Kiwi Crates.  Each month the library receives  two  STEM kits  and uses them as the basis for programming that kids can  share with another person  and work through the challenge of creative problem solving.   The Kiwi Crate programs teach kids to “think big” and act like creators and producers instead of just consumers.  Thus kids gain confidence and don’t assume there is only one “right way” to build with blocks, paint a picture or solve a problem.  Bellingham  kids have made robots, kaleidoscopes, waterwheels, and a variety of other very cool STEM projects.  Parents are thrilled that the library offers these kits and the goal of engaging the whole community in an enlightening experience with science continues to be supported. For more information about these programs please contact library director, Bernadette Rivard. brivard@bellinghamma.org