By Maura Deedy, Library Advisory Specialist at the MBLC

The Massachusetts Board of Library Commissioners (MBLC) Trustee Orientation program held virtually in our living rooms, offices, and kitchens is now available on demand.

The orientations are an opportunity for new trustees to learn about the MBLC and state funding and for seasoned trustees to gain a refresher. We cover roles and responsibilities, legal obligations, advocacy, State Aid, and more. We missed visiting libraries across the Commonwealth and meeting trustees, directors, and library staff. It’s an opportunity to see firsthand the beautiful spaces, learn about challenges and about what makes very library unique.

The fall Trustee Orientation was recorded, and we are pleased to make that available via our YouTube channel with closed captioning.  The video has been edited into eight sections, allowing trustees to revisit topics as needed. This was recorded on October 1, 2020 and some information regarding COVID-19, library services, and policies may have changed. If you have any questions, contact the MBLC. Please watch these and bookmark the Virtual Trustee Orientation packet for the referenced materials.

The future is unknown and we plan on continuing our virtual orientations into 2021. We look forward to making the spring season more interactive with a new series of programs called Trustee Deep Dives meant to strengthen trustee’s knowledge and toolkit in their roles.

Previous blog posts have been highlighting excerpts from the Trustee Handbook focusing on laws and liability relating to libraries and library trustees. What follows is a list of laws that apply to libraries for your reference.  As you can see many of the items on this list go beyond the specific laws governing boards of trustees that we have covered in MGL Chapter 78. Being aware of the broad range of laws governing libraries, human resources, finance, and labor relations is essential. And an important best practice for librarians and library trustees.

It is advisable for trustees and the library director to acquire a familiarity with local, state and federal laws which may have an impact on library management by consulting with local municipal officials and other authorities.

A Selective List of Massachusetts Laws with Relevance to Libraries:

Information pertaining to this blog post can be found on pages 43-45 of the Massachusetts Public Library Trustee Handbook.

For more information about all services and resources available to trustees please visit the MBLC Trustee page (https://mblc.state.ma.us/for/trustees.php).

The Open Meeting Law generates a lot of questions from trustees across the state. The most frequently asked is, “does this law apply to me?” The short answer is, yes! Public libraries in Massachusetts must adhere to open meeting laws. For corporation or association libraries that receiving ANY amount of municipal funding, following open meeting law is a basic best practice.

Below are links to resources available from Massachusetts Attorney General’s office. We recommend that all trustees review these materials to learn how the law applies to posting meetings, taking meeting minutes, executive sessions, and the use of email and social media.

All library trustees should be familiar with the Open Meeting Law, which mandates meeting notices be posted prior to meetings of public boards, requires records or “minutes” of meetings to be kept, and delineates certain instances in which portions of meetings may be closed to the public. The Attorney General’s office has some helpful resources on their website, including the extremely useful Open Meeting Law Guide. Questions concerning the Open Meeting Law should be directed to the local Town Clerk or the Attorney General’s Division of Open Government (http://www.mass.gov/ago/government-resources/open-meeting-law).

Certain library boards, such as boards of some association libraries that are not municipal departments, may not be considered public bodies under the Open Meeting Law. If such a board is uncertain of whether it must comply with Open Meeting Law, the board should contact the Attorney General’s office directly for a determination. Some association/corporation libraries may be required to follow Open Meeting Law under agreement with the municipality that they serve. It is strongly recommended that all library boards follow the tenets of the Open Meeting Law, even if they are not required to by law. A board that practices openness and transparency will be better able to maintain a good relationship with the municipality and seek support from its community

Information regarding Open Meeting Law can be found on page 41 of the Massachusetts Public Library Trustee Handbook.

Please join us at the MBLC’s Trustee Institute, April 27th! For information and registration: https://mblc.libcal.com/event/5158107?hs=a

The laws that establish the authority and role of library trustees can be found in the Massachusetts General Laws Chapter 78. It is important to know that in some instances, state laws governing Libraries and trustees are superseded by local laws found in town and city charters. Trustees should be aware of all established and proposed local laws that pertain to the organization and management of their library. Today’s Trustee Handbook Focus looks at local charters and how they impact libraries.

Some Massachusetts municipalities are governed by special legislation or a charter, components of which may or may not relate directly to the library. It is critical for trustees to know if their municipality has such a charter or has plans to implement one, and if so, how its provisions affect their library. While trustees have traditionally looked to Massachusetts General Laws Chapter 78 to delineate the rights and responsibilities of trustees to exert “custody and management” over public libraries, a local charter will take precedence over Massachusetts General Laws.

If your community is planning a charter change or adoption, make sure that at least one trustee becomes familiar with the charter reform process, and is informed every step of the way about proposed changes. A proactive board is a well-informed board which serves as a partner in the change process. It is much easier to keep unfortunate changes out of the charter than to try to fix problems after the fact. The following are issues which may not constitute the main thrust of the changes to the charter, but may somehow “sneak” in if trustees don’t pay careful attention:

If your municipality is considering a charter or home rule change, it is imperative for your board to be involved and aware of the seriousness of the issues at stake. If charter reform, home rule petition or other effort is underway to revamp municipal power and decision-making, the library should get involved from the start to advocate for wording which exempts the library from being under the control of another municipal department or officer.

Trustee Tip!
Successful boards of trustees know what’s happening in their communities and are active players in the local political process. Remember that it is your responsibility as a trustee to advocate for the best possible library services and practices. Library boards that stay active and involved in community affairs yearround are better positioned to make their case for the library than boards that wait until “crunch time” to get involved.

For more information about all services and resources available to trustees please visit the MBLC Trustee page (https://mblc.state.ma.us/for/trustees.php).

Please join us at the MBLC’s Trustee Institute, April 27th! For information and registration: https://mblc.libcal.com/event/5158107?hs=a

Library trustees have a unique and vital role in the oversight, stewardship and advocacy of public libraries in Massachusetts. Trustees gain their authority from legislative statute (MGL Chapter 78, Section 11) but the details of their day-to-day duties are based on local rules, bylaws and traditions. Because of this, the MBLC does not have legislatively mandated regulations for how trustees must carry out their duties. What we do have is the benefit of over 125 years of experience as a statewide agency overseeing libraries in Massachusetts. This experience has established a wealth of best practices that is available in the newly revised MBLC Trustee Handbook. 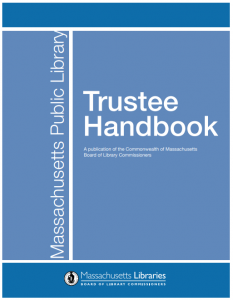 The handbook is a valuable resource to help trustees navigate the many procedural and policy questions that boards face on a daily basis.  The handbook is arranged by the following sections:  Becoming a Trustee,  Board Organization, Legal Responsibilities, Policy Making, Planning, Personnel, Budgeting and Financial Management, Library support: Fundraising, Foundations and Friends, Advocacy; Library Construction and Resources.

The handbook is available in PDF format on the MBLC’s Trustee Page (https://mblc.state.ma.us/for/trustees.php). In addition to the handbook, the Trustee Page links to the MBLC Trustee Resource guide , MBLC resources and services, and to the Massachusetts Public Library Trustees Discussion List.