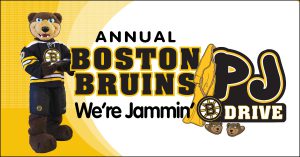 By Celeste Bruno, Communications Director at the MBLC

Collecting PJs to give to DCF kids is a good thing and libraries across the state have pitched in to be community collection sites. The Boston Bruins set a lofty goal for libraries—10,000 pairs in just over a month—and while we’re still counting, here’s some fun things you may not know about this year’s PJ Drive:

But please remember: No matter how many pairs of PJs you collected, each one makes a difference in the lives of the children who will wear them.

Thank you to all the libraries that help make this drive such a huge success.